Why and how is China investing in Africa ?

Since the progressive liberalization of the Chinese economy initiated by Deng  Xiaoping – leader of China from 1978 to 1989 – in 1978, Chinese companies have been growing on the domestic market and new markets worldwide. However, with a total value of 170 billion USD in 2013 for Chinese trade in Sub-Saharian Africa (SSA) and a growing investment effort from the People’s Republic of China (PRC) in this region, African markets deserve a special focus.

Chinese officials have been looking towards Africa since the Cold War, between the US and the USSR, notably for political reasons. Since then, the People’s Republic of China (RPC) has rapidly increased its ties to the continent, due to the strategic importance of the continent for the Chinese economy.

China’s intervention in Africa is evolving as much as China itself: from public investments to private investors

Chinese investors traditionally favor investments in extractive resources as China needs more energy to fuel its growth (around one-third of China’s energy imports come from Sub-Saharian Africa). The PRC started to invests where the resources are, explaining the concentration of Chinese FDI in Nigeria, South Africa, Sudan, and Zambia.

However, Chinese FDI are now extending across the continent as investments concern other fields, such as construction, manufacturing, agriculture, transportation and communications. This trend seems to be in line with the reorientation of the Chinese economy towards a more consumption-driven model.

This led to a change in the way Chinese investments are being handled. The financial Chinese intervention is mostly initiated by bilateral government summits and driven by major State-Owned Entreprises, i.e Chinese major banks such as the People’s Bank of China, the China Development Bank, and the Export-Import Bank of China. However, Africa has also seen growth of investments from smaller Chinese investors in food outlets, retail shops, and textiles. If there was little room for private initiatives so far, things are now changing.

A presence eased by the financial and historical context

If Africa’s economy is projected to expand by 3.7% in 2016 according to the OECD, the continent is severely indebted and faces problems such as political instability, corruption and poor infrastructural development.

To a lesser extent, this also applies to Chinese private companies that are more used to evolve in risky set-up, notably politically, than Western investors (laws are more protective of private owned assets). This makes Chinese entrepreneurs more risk-takers than their European or American counterparts.

Moreover, similarly to China, Africa is a strongly price-sensitive market due to the purchasing power of most of the population.  Chinese investors were able to enter various markets, from low-prices consumer goods to infrastructure programs, that Africa needs to steer economic growth.

To ensure low prices, Chinese firms benefit in some industries from a low wages workforce. If Chinese companies have been under great criticism for employing in some expensive industries Chinese workers (usually in countries extracting oil like Angola), some other firms leverage on the benefits of the cheap labor available. In some cases indeed – as Chinese firms have witnessed a dramatic increase in wages over the last years in China (plus the additional cost for housing imported workforce) – they hire locals who represent up to 99% of the total workforce, while the management usually remains in Chinese hands. 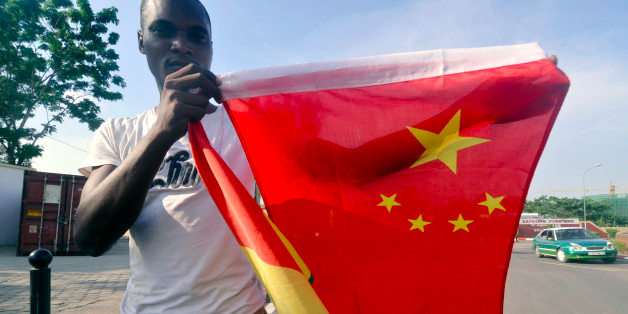 The Afrobarometer of the 24th October 2016 – collecting data from 36 African countries – suggests that “China’s growing presence in Africa wins largely positive popular reviews” with 63% of the Africans considering that “China has a somewhat or very positive influence in their country”. This survey also shows that the PRC ranks second after the US as a development model.

China is also popular among some African leaders, which might be explained by the way China manages its help to Africa. When Zhou Enlai went on his African tour between 1963 and 1964, he spoke of the « Eight Principles of Foreign Economic & Technological Assistance”. Among these principles, that have been the theoretical grounds for the Chinese intervention in Africa until now, the second is worth being mentioned: “China never attaches any conditions or asks for any privileges ». Indeed unlike the IMF or Western-style programs, China does not assort its help neither to liberal reforms nor to human rights conditions. China rather invests according to the possibility to access oil or mineral resources (used as collateral).

With 4,7% of the total stocks of FDI in Africa, the PRC is for now far behind other countries and is carefully planning its investments in a long-term strategy.

The Chinese government is providing aid, mainly financial help, to support its implementation in Africa. The Forum on China-Africa Cooperation (FOCAC), created in 2000 is the main institutional vehicle set for the Chinese strategic engagement in Sub-Saharan Africa, especially regarding financial support.

The Chinese intervention is hard to circle, due to its lack of transparency and the complex articulation between investments and aid.

However, the 10 billion USD provided to Africa from 2009 and 2012 (an amount that doubled for the 2013-2015 period under President Xi Jinping) in the form of “concessional loans” fall under the definition of “aid” by the OECD.

Those aids are a way for China to manage its long-term relationships with African countries, as most of the financing is driven through the state-owned banks. The Chinese government is using its economy for long term political purposes.

A  strategy answering many objectives

China aims at securing its strategic needs in terms of resources, to fuel its economy, and find a new market for its industries.

Encouraged by the government to expand out of their domestic market, Chinese companies use their strengthened financial resources as well as their experiences on other markets to invest where there is emptiness to fill. Indeed, as many western companies left Africa in the wake of the financial crisis in 2008, China caught the opportunity to invest in an area where investors were more than welcomed, if ready to bear the specific African context.

The voluntarist policy of China in Africa also serves political purposes. Aiming at getting back in the rows of influent countries in the world, China does not forget how it gained diplomatic recognition from 44 African countries in the middle of the 1980s after supporting Africa, in times when the PRC was itself relatively poor.

Similarly China is nowadays managing its relationship with African countries to achieve greater political influence, notably within the UNO (28% of UN members are African countries). China could this way increase its military and political power through the development of strategic partnerships and the highlights of its culture and language (a strategy in line with the competition with the USA to propose a different model at the global level).